Boardgames are one of the most interesting hobbies in the world. Boardgame is not only the game, but much of good emotions and of course another way to meet new friends when playing together. The history of it starts at least in Ancient Egypt, maybe even earlier, and continues till our time.

Many years most of well-known games, authors and companies were associated with Europe and USA. And most of the boardgamers didn’t know much about boardgames in Russia. Of course, there were different soviet union game projects in 20th century like in other countries. But many of them have very simple mechanics (very often based on dices) and weren’t interesting for Europeans and gamers from other countries. 90-ths are well-known as reformal years in Russia. Crisises in many spheres of country life make people not thinking much about entertainment and especcially boardgames.

The modern russian boardgames started their way to gamers’ tables less than 10 years ago. And now there are several companies in Russia that publish, distribute and sell boardgames. One of the oldest companies, Zvezda Ltd is publishing boardgames for other countries under Sirius Products brand for about 3 years. RightGames is another company that starts to publish their games for Europe. And Evolution is one of these game projects. 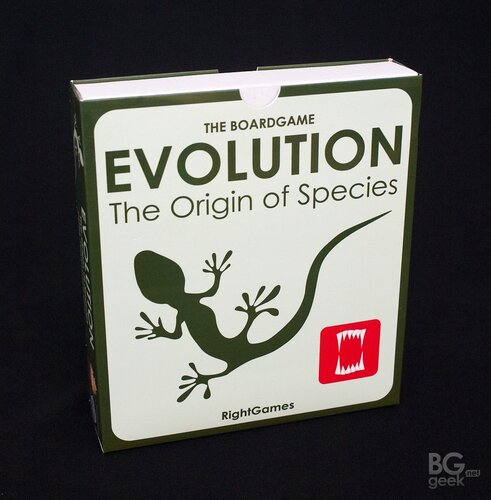 The box, as you see, aren’t small and represents one of the last “russian standards” of game packs for small boardgames, including card games.

Unfortunately, quality of cardboard used as box material aren’t the same as in foreign boardgames and several russian localizations, for example, made by HobbyGames (“Smart Ltd”). But we understand that RightGames prints game components in russian print shops and first of all quality depends on typography printers and service prices. But quality-price ratio of that services aren’t always satisfactorily, even now. That’s why some russian boardgames (of other publishers) prints in foreign countries and even sometimes have “Made in China” label on the back of the box.

The box aren’t very big ( 17 х 19 х 4 cm ) and have special sliding up’n’down construction. The inner box made of crimping cardboard that makes game more durable. The cover made of thick glossy cardboard so the game looks attractive for potential buyers. 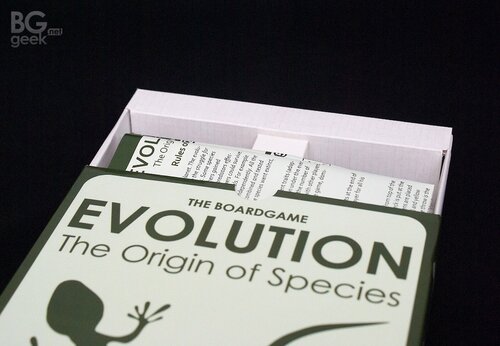 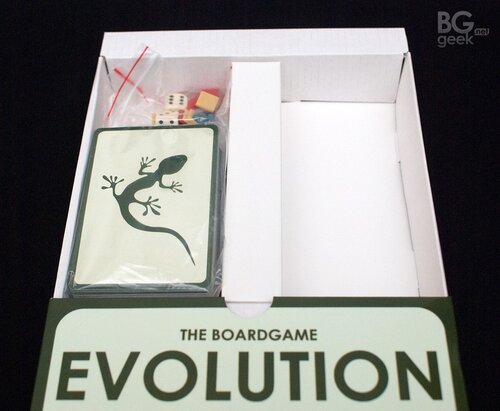 The inner space is divided into two parts that prevents game components from rolling from side to side while box is carrying for example in the bag.

We can find next components inside:
– two dices and set of plastic tokens;
– pack of cards;
– game rules and example of game;
– advertising sheet with other company projects. 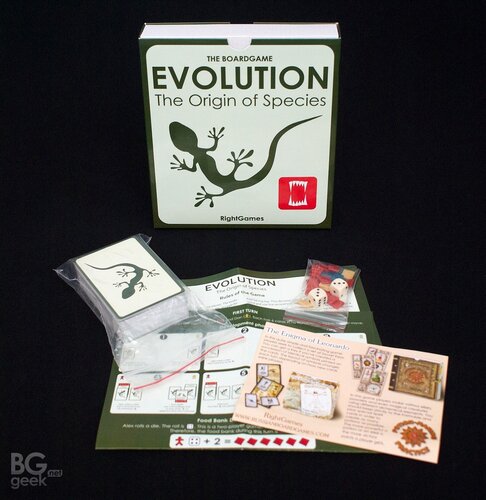 As you can see, the box for this set of components may be a little smaller. I think that even about two times smaller.

The cards and small pieces carefully packed into zip-locks. 🙂 In a practical way it helps to keep cards additionally from mechanical damage when moving inside the box. And also it allows you to carry cards pack without game box if you want to. All of these small things about components are also composing into main impression of the game.

Well, let’s unpack, touch and take a better look at them.

Dices are made of good plastic and although have unusual size ( 12 mm ) but felt enough comfortable in hand.

Counters are made of colour plastic and (i don’t know why) shaped like squares. I thinks that authors haven’t chose the better shape according to game theme about animals and evolution. Maybe it’s because of small budget of game project.

What about game cards?

There are 84 cards in the deck. All of them have the size of 90 x 61.5 mm and made of cardboard with thickness about 0.4 mm and little glossy (you can see it in the sun or lamp light) and also little rough surface. Because of rough characteristic of surface the cards shuffling won’t be ideal for first time of game usage. Maybe it could be better if surface will be less rough and little more glossy – for example, like in Monopoly Deal. In spite of great quantity of cards the shuffling is very easy in this game and cards don’t catch on each other. 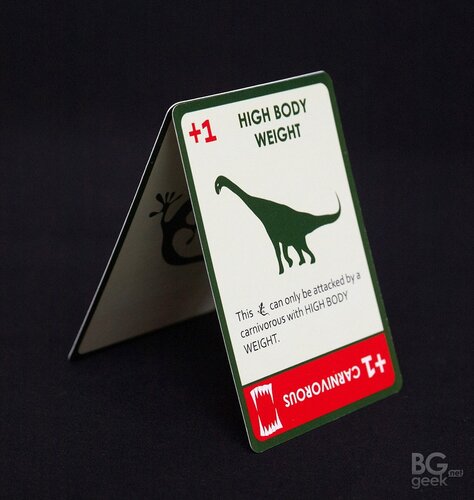 The main cards colours (light- and darkgreen) are enough comfortable when playing the game and looking at the cards – undoubtedly this is a plus to usability and gameplay.

Properties images must be especcially attended. In spite of their simplicity they are well remained in memory and easy recognized among all the cards. So, simplicity and minimalism of images are conductive to easier gameplay. Maybe in new game editions images will be in other style. I’ll be interesting in their comparison with present style. 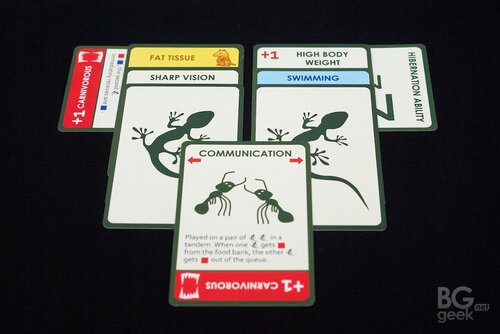 Properties names are placed near the card sides, so they are still readable even when rotated (according to game rules some properties cann’t be used in next turn and marked with rotation to left or right side – exactly like in some collectible card games).

Some special properties may be used on two cards at once (on two animals) and must save the connection between them even when personal animal properties rotated. 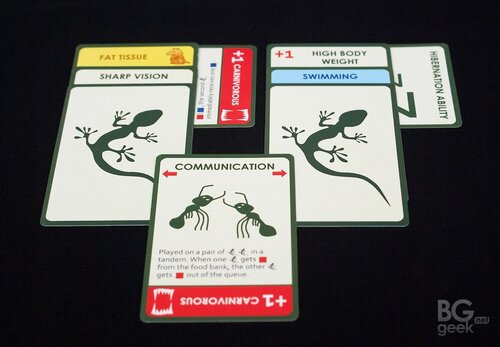 You don’t know that in russian edition each card contains both russian and english property name, but it’s true. Maybe it’s because of game biological theme where many terms came from Latin. But maybe that’s because of game materials was initially created for export edition too.

So, we have the card game with cardboard and plastic components, simple and easy-to-understand design and glossy compact box. That’s not all. Evolution is a original game and not only because of it was made by a man well known in Biology science society, Dmitry Knorre, but, of course, because of it’s mechanics and unusual usage of both sides of all cards. Well, what about gameplay details and Evolution mechanics?

Let’s talk about it in next review of Evolution.. Very, very soon 🙂 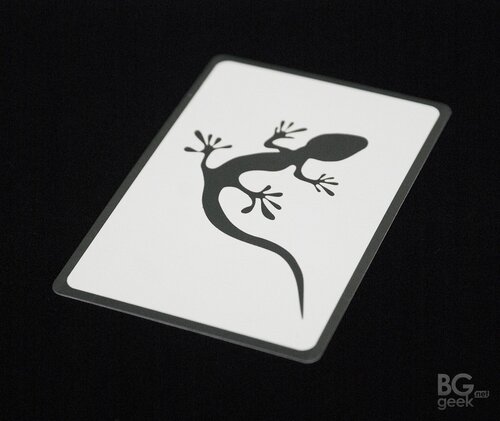